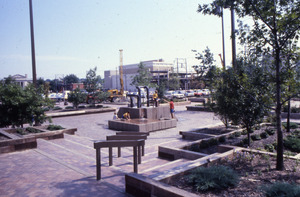 Pedestrian Mall and fountain. Dated August 1980. This photo features the fountain informally called "Three Women Peeing," an unnamed sculpture created by Bob Satter and Brian Gutheinz. It was a tubular fountain on stepped brick platform, made with steel (?), brick and concrete. According to a July 23, 1992, article in the Daily Iowan, the fountain cost $80,000 to build and donations were collected by Project Green. The fountain was built in 1978 and dismantled around 1999-2000.