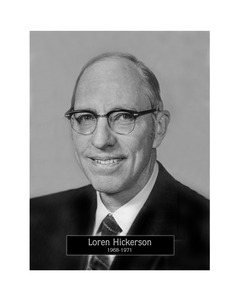 Loren Hickerson was mayor of Iowa City from 1968 to 1971, serving two terms. According to Downtown Redevelopment, The Iowa City Story, Mayor Hickerson "paved the way for the eventual implementation of the federal urban renewal project in Iowa City" (Caliger, p. 5, 1983). On page 24 of the same publication, Caliger writes, "It was on September 2, 1969 … that the Iowa City Council passed 19 separate resolutions, one by one by one, reenacting under the new law all precious official actions which had been cancelled by the Supreme Court’s ruling under the old law. And so it came to pass that evening that the Iowa City urban renewal project, like the mythological phoenix, rose renewed from the ashes of its pyre."