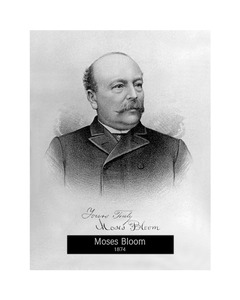 Moses Bloom (1833-1893) was mayor of Iowa City in 1874, serving one term. Bob Hibbs wrote the following for the Iowa City Press Citizen's Fabulous 150, "Born in France, he arrived in Iowa City in 1857, becoming the first long-time clothier. After serving as Iowa City mayor during 1874, he was elected to two terms as a state legislator, securing a 'permanent annual endowment' of $20,000 for the university." Hibbs writes that Bloom gave a speech to men in the Union Army while standing on a box car at a train depot, before they headed off for the Civil War.