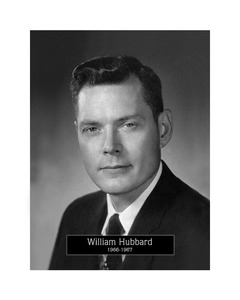 William Hubbard was mayor of Iowa City from 1966 to 1967, serving one term. Bob Hibbs wrote for the Iowa City Press Citizen's Fabulous 150 that Mayor Hubbard was "downtown businessman (Jackson’s) and electrical contractor..., a shaker who steadfastly supported a local human rights ordinance, and a downtown urban renewal project against fierce opposition. His tough stance with neighboring governmental jurisdictions helped create the tenor of modern intergovernmental relationships, leading to charging fees to University Heights for city services, plus receiving county contributions for library service and senior center use." See the Fabulous 150, where the Iowa City Press Citizen celebrated 150 years of publishing. (http://www.press-citizen-media.com/150/hubbardw.html)

William Hubbard was born in Iowa City on June 6, 1925, to Dr. Eugene Hubbard and Myrtle Spatz Hubbard. He is survived by: his sister, Dorothy Housel, of Iowa City; his four children, John Hubbard of Coos Bay, Oregon, Bill Hubbard of San Francisco, Mary Hubbard of South Bend, Indiana, and Jean Randles of Seattle. He was preceded in death by his wife of more than 50 years, Jean Wheeler Hubbard.

He attended City High School and earned his BS in Electrical Engineering at the University of Iowa. He went into business, initially with his sister and brother-in-law, and later on his own, with Jackson Electric.

Bill was the youngest Mayor in Iowa City’s history in the mid-sixties, working successfully with the University to keep the anti-war riots non-violent, and his legacy from that time includes: the city’s first Fair Housing ordinance, outlawing racial discrimination in rentals and ownership; the much-disputed one-way streets; the Recreation Center; and the Pedestrian Mall. Later he was appointed Chair of the Merit Employment Commission by Governor Robert Ray. He also served on a number of Boards, especially treasuring the work he was able to do with Goodwill at a critical juncture in their history.

Further, his legacy includes an abiding sense of justice, a wicked sense of humor, and a life-long love of learning. He valued his friends highly and served honorably in both elected and appointed office.

He passed away peacefully at home on October 12, 2018, with family present.