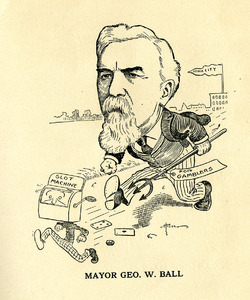 George W. Ball was mayor of Iowa City from 1905 to 1909, and an Iowa Senator from 1900-1902. According to the 1910 Census, George Ball resided at 429 North Clinton Street. His wife was named Estella and had two children, Walter M (also a lawyer, and an abstractor) and George W. Jr., another lawyer, who lived with his wife Maud and her mother. A servant, Marie Linder, also resided with George Ball’s family.

The attached ad was published in the Iowa City Daily Press on July 12, 1904.

The attached article was published in the Iowa City Daily Press on March 13, 1907.

Born near Fairfield, Jefferson County, Iowa, June 7, 1847. He spent his youth on his father's farm in Jefferson County, attended common school, and Wesleyan University, Mt. Pleasant, graduating in 1867. He also graduated from the law department of the State University of Iowa in 1869. He practiced law a short time in Des Moines and in Mt. Ayr, Iowa, and then in Chicago, but in November, 1874, he removed to Iowa City and formed a partnership with Charles Baker, which continued until Mr. Baker's death in 1910. Then he formed a partnership with his son, George W. Ball, Jr. In 1885 he was elected representative and served in the Twenty-first General Assembly. He was county attorney of Johnson County for four years, 1893 to 1896. In 1899 he was elected senator and served in the Twenty-eight and Twenty-ninth General Assemblies and was mayor of Iowa City from 1905 to 1909. He was vice president of the First National Bank of Iowa City. He was a member of the board of curators of the State Historical Society. He was prominent in the different branches of Masonry, and was grand master of the Grand Lodge of Iowa two terms, 1895 and 1896. Source: Annals of Iowa, Transcribed by Debbie Clough Gerischer, January, 1921, Third Series Vol. Xii, No. 7