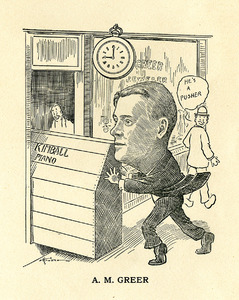 Albert M. Greer was the proprietor of Greer’s Jewelry Store at 128 South Clinton Street and a music store. According to the 1910 Census, he was born about 1862. His wife was named May, and they had two daughters named Mildred and Gertrude. They lived at 15 East Market Street. One lodger, Julia Beranek, also lived with them. The 1911 directory lists “Jeweler Optician Pianos Organs Music and Musical Merchandise” next to his name. May’s name is spelled Mae in this directory.

The attached article is from the Daily Iowa State Press on February 19, 1900. The Judge Rules in District Court article was published in the Iowa City Daily Press on April 19, 1912.