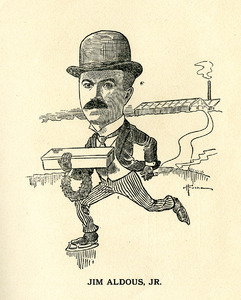 In the 1910 Census, Jim Aldous, Jr. was listed as a florist at 14 ½ Dubuque Road. His wife was named Margaret and two lodgers lived with them. In the 1908 City Directory, his home address is listed as 710 Church Street. There is an advertisement in the 1908 City Directory that lists the store at 122 Iowa Avenue, Greenhouse Corner Church and Dodge. James Aldous, Sr. is also listed at the 710 Church address in this directory.

The attached ad was published in the Iowa City Citizen on April 23, 1919.