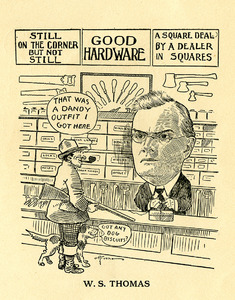 Will S. Thomas was the proprietor of the Thomas Hardware Store on the corner of Dubuque and Washington Streets. His home address is listed as 109 South Johnson Streets in the 1908 City Directory. His wife was named Carrie C., and their children were Harold C. and Willie S. His mother-in-law Emma M. Close also lived with the family. He was born about 1861 in Missouri.