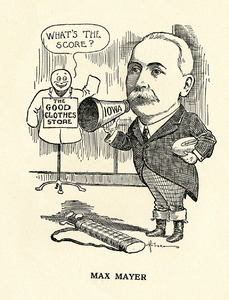 In the 1910 Census, Max Mayer resided at 714 College Street at the College Hill Apartments. He was born in 1859 and had a wife named Julia. They had three children named Florence, Laurance, and Edward, and two servants named Anna Kessler and Clara Marek. In the 1908 City Directory, Mayer’s business was listed as Good Clothes Store at 28-30 South Clinton Street.