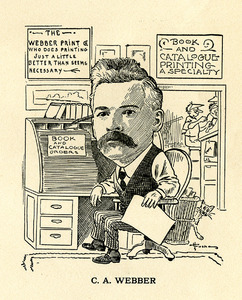 Charley A. Webber was born about 1872 in Illinois. His wife was named Neta C. and they had two children named Russel L. and Charlotte A. He was a printer at Weber Printing Company at 218 Washington Street, according to the 1908 City Directory. Their residence was at 904 Bowery Street. The printing company was listed at 115 East Iowa Avenue in the 1911 directory.

The attached article was published in the Iowa City Daily Press on March 27, 1906.