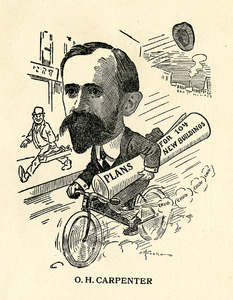 O. H. Carpenter was an architect who resided at 529 South Clinton Street. He is listed in the 1910 Census as Orville Homer Carpenter. His wife was named Anna B. and they had two children, Melba and Aileen. Two roomers also lived with them, Fay Gay and Mabel Rooeyfrif. An ad at the end of the 1911 City Directory lists his business at 5 and 6 Phoenix Block.

The attached advertisement was published in the Daily Iowa State Press on October 21, 1901.