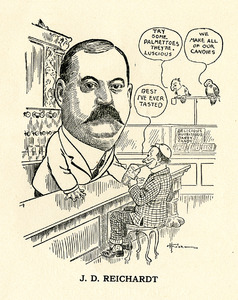 John D. Reichardt was listed as a confectioner residing at 425 East Iowa Avenue in the 1910 Census. He was born in 1866. His wife was named Elizabeth and they had a son named Herbert. Also living at the address was his brother, named Louis, and his sister-in-law Cristine O. Stork. The address of the confectionary was 21 South Dubuque Street, according to the 1908 City Directory.